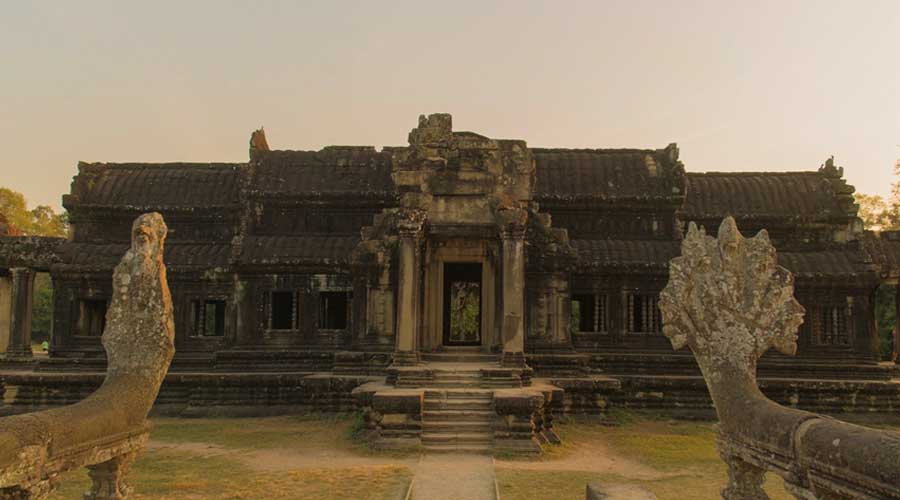 The historical myths of the birth of the Khmer Kingdom

The legends and myths surrounding the foundation of the Khmer kingdom are fascinating.

Everyone loves a good story… Naturally, there are more than one. But the common denominator is the belief that the Khmer people sprang from the union of an Indian prince and a native Naga princess.

This is one version:

The Indian prince, Preah Thong, had a dream in which he was told to sail by ship to a golden land in the East. Once he reached it, he would find a great new kingdom. He sailed for days and eventually reached an uninhabited area of stunning beauty. Preah Thong saw a large tlok tree growing there and decided to name the island Nokor Kok Tlok, Kingdom of the Tlok Tree. Tired from his travels, he fell asleep under the tree and woke when the moon came up. Preah Thong gazed out over the shimmering sea at the paths of moonlight and wondered why there were no people on his new island kingdom. Then as he watched the water, figures began to surface from beneath the waves.

The prince hid behind the tree and watched as the group prepared a feast.

The men wrestled and engaged in mock sword fights, and the women dreamily played musical instruments and sang so sweetly. One stood out from the rest for her staggering beauty. Preah Thong was smitten and couldn’t conceal himself any longer. Mesmerized, he jumped out from where he had hidden and asked the beautiful lady her name and why they all lived underwater.

She replied that he had come to the land of the Nagas and she was Neang Neak, daughter of the Naga king. She and her royal court gathered on the beach every full moon. Neang Neak was surprised to see a stranger there and that he had spoken to her in this way. He had committed a severe crime in her kingdom, as no one was allowed to talk to Royalty unless they had been addressed first. In a show of leniency, she said he could tell her who he was before he was killed for his crime.

Preah Thong explained that he too was a foreign prince and managed to sweet-talk her enough to declare his love. She agreed to take him to the underwater Naga kingdom so he could ask the kings permission to marry her.

In slightly different versions of the myth. Nean Neak was a serpent princess, and Preang Thong held onto her tail as they dived under the water.

Other say the Indian prince was named Kaundinya and that the Naga princess called Soma. The island was upstream in the Mekong, and Kaundinya beat Soma in a fierce battle. Then she had no choice but to agree to marry him. In another telling, the prince was called Kambu, and his newfound kingdom, Kambuja – meaning Cambodia.

Following these beliefs, traditionally kings of the Khmer Kingdom were all symbolically married to the Naga Princess.

A Chinese visitor to Angkor in the 13th century wrote how legend dictated that the king sleeps in a golden tower. Some people now believe to be inside the 10th Century Angkor Thom. He described how the tower was thought to hold the spirit of the serpent who was lord of the land and took female form at night. The king was expected to sleep with the spirit first and then he could be with his Queen and concubines. If the spirit didn’t show one night, then the kings’ death was close. If the king failed to show, then disaster would befall the kingdom.

Today at Khmer weddings, the story of Preah Thong Neang Neak is incorporated into the ceremony.

The groom receives some snakeskins from his bride to symbolize his entry to the kingdom of Naga. In other rituals, the groom holds on to the brides Sii Bay ‘a scarf worn over the shoulder’ (symbolizing the tail of his serpent bride). And, they walk three times clockwise in a circle to represent their entrance to Naga.

Immerse yourself in the Khmer Kingdom with a cultural cruise through Cambodia onboard Sovanna.