Welcome aboard for a luxurious and relaxing stay on Sovanna our stunning boutique hotel & houseboat that cruises the Tonle Sap River between Phnom Penh and Kampong Chhnang. And, return to Phnom Penh after your visit to Angkor Wat and Siem Reap should you desire.

This scenic 95 km stretch of the Tonle Sap River between Phnom Penh and Kampong Chhnang is breathtaking. There are many historical and interesting sites to visit on a one-day, two-day, or even three-day cruise. Let us tell you about some of the possible stops along the way.

An overnight cruise is from Phnom Penh to Oudongk and returns to Phnom Penh the following day. If you have time for a leisurely two-day cruise, we will travel to Oudongk on the first day, and up to Kampong Chhnang on the second day. And, if you’re really looking for a complete break, a three-day cruise is the ultimate in relaxation.

We’ll travel to Oudongk on the first day. To Kampong Tralach on the second day before heading to Kampong Chhnang on the third day. For anyone taking the two or three-day cruise, following breakfast, our driver will meet you at the quayside and take you onto Siem Reap and Angkor Wat in time for Lunch.

The buildings found in Angkor Wat were deliberately designed by Hindu architects to mirror the sacred peaks of Mount Meru where all the gods resided.

We will cruise from Phnom Penh to Oudongk and give you the chance to explore or to relax aboard. We will serve dinner and stay for the night.

Leaving Phnom Penh around noon, we will collect you from the quay and sail up the Tonle Sap River towards Siem Reap. Lunch will be served shortly after departure, and we will continue steadily along the river for approximately four hours, mooring up for a peaceful evening on the river.

We’ll cruise at a sedate pace that gives you plenty of time to chill out in our jacuzzi pool, soak up the ambience, relax on sofas or sunbathe on our comfortable loungers and enjoy the scenery as we pass floating fishing villages, houses on stilts, pagodas and fields of crops. And all this whilst enjoying some cocktails that are just divine. We will serve dinner in the evening, and you’ll get to experience the peace, tranquility and the sounds of the river at night.

The haunting beauty of Oudongk, the resting place of past kings of the mighty Angkor empire, sighs with the imprint of times long gone.

Ancient rulers share space with modern day child monks who sit cross-legged among burning incense and give blessings in exchange for offerings. Legend has it that a large cavern underneath Arthaross temple housed all the treasures of Cambodia.

Gazing across the ridge at the expanse of bucolicCambodian countryside, the silence throws a serenity over the echoes of battles past as this was the setting for one of the last strongholds of the Khmer rouge.

It is situated at the base of the Phnomh Udong Mountain and is known locally as the “City of Past Kings”. In Oudongk itself you can explore the Buddhist Monastery Temple Complex, Moni Sakor Pagoda. The temple and its grounds are beautiful.

A climb up the mountain, fortunately, served by a leafy covered, wide, shallow step stone stairway – making it somewhat easier, will give you a stunning view over the Cambodian countryside and rice paddies. There are stops for water along the way. But be aware there are at least 500 steps! At the top of the mountain, there are many interesting stupas, (monuments that house Buddhist religious relics) including Preah Sakyamoni Chedi, which is believed to contain a relic of Buddha himself, making Phnom Udong a sacred place in Cambodia.

Equally outstanding are the Royal Tombs of Oudongk known as Phreah Reach Traop. Where, as you probably guessed are held the remains of many Cambodian rulers, beautifully decorated and carved with a mixture of Hindu and Buddhist motifs. Look out for Arthaross Temple, built in the 13th century by Chinese craftsmen and which contains the remains of a large Buddha statue which was partially damaged during the last days of the Khmer Rouge, who used the mountain as a stronghold.

A statue of Buddha greets you serenely from the river bank, inviting you to come and take a look. The air vibrates with the sounds of hammering and is filled with the scent of palm sap heating in pans. Generations of families on the island have worked with copper and silver, forging traditional style dishes, pots, vases, boxes and trays.

Around 40 families are based on the island still working their trade. With traditional Cambodian warmth, they invite you to take a look inside their pocket-sized open-air workshops. It’s usually the role of the menfolk to create the objects and the women decorate and intricately engrave them.

These items, particularly the engraved silver pots were used in marriage ceremonies, where a prospective groom gifted one to his in-laws. They are also used in the blessing of the monks’ ceremonies and favoured by the royal family as gifts for visiting dignitaries.  Youngsters watch their elders and learn how to master the art.

Today there are many interesting local shops to visit where you are sure to find a memorable souvenir. Small silver plated pots, fashioned into animals are particularly light and won’t take up much of your precious baggage allowance!

In the morning, after breakfast, we’ll return to Phnom Penh for those people who booked An Overnight cruise. Otherwise, we’ll continue to Kampong Chhnang (2-day cruise) or to Kampong Tralach (3-day cruise) 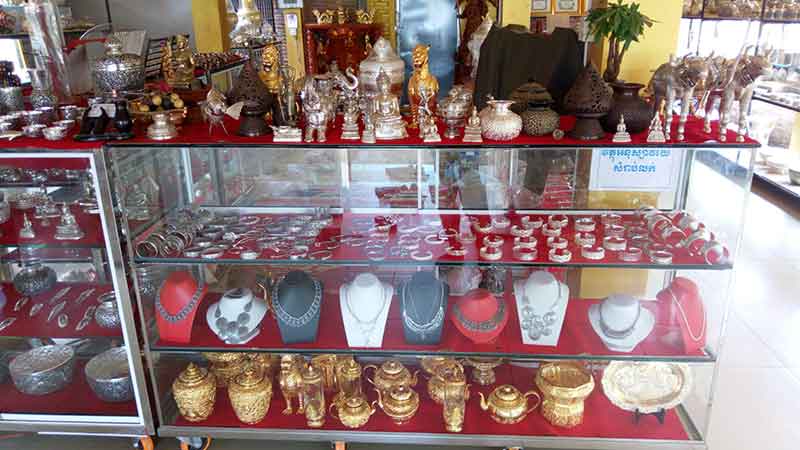 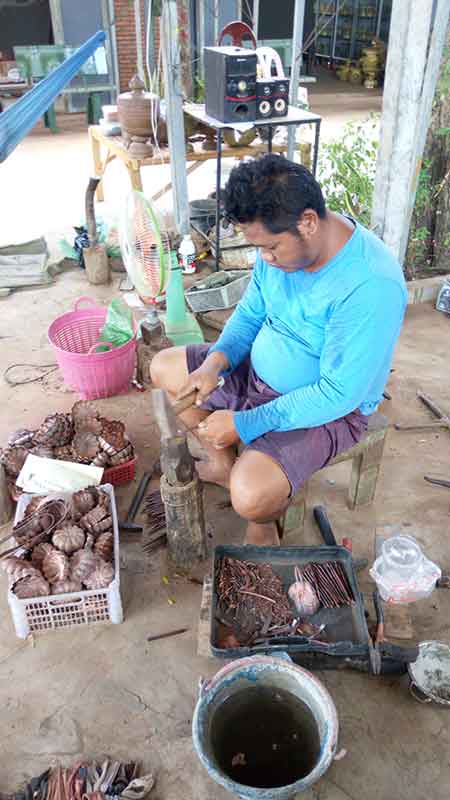 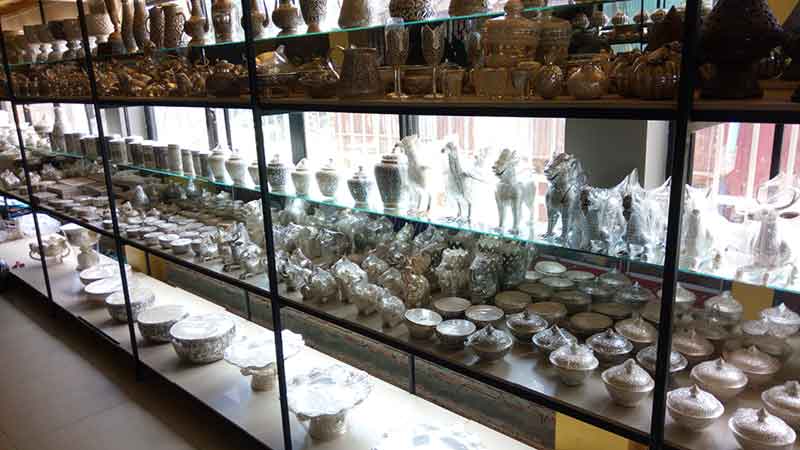 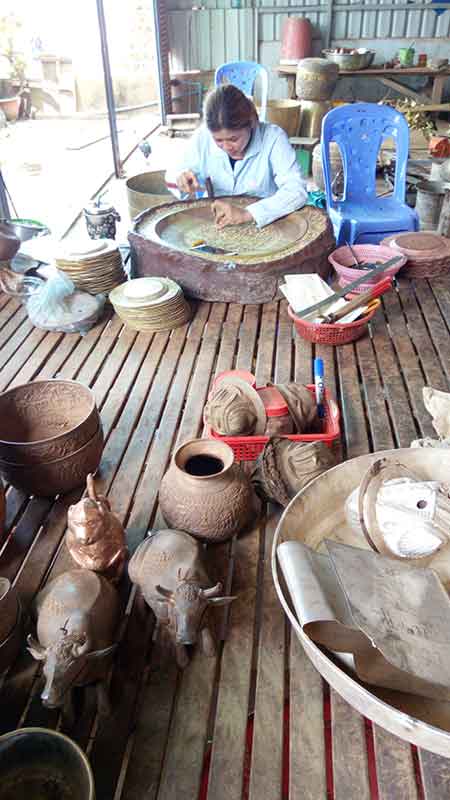 Meaning “Port of the Winter Melon” – Kampong Tralach is the site of the former capital of Cambodia called Longvek.

The capital was moved to Longvek following the sacking of Angkor in 1431 by the Siamese King ‘Borommaracha II’.

Located on the banks of the Tonle Sap river roughly halfway between Phnom Penh and Tonle Sap lake, Longvek was chosen because it could be more easily defended. A capital of commerce, European traders and missionaries were regular visitors throughout the 16th and 17th centuries. Today archaeologists are finding more foreign ceramic artefacts as evidence that Longvek was an important trading capital.

There are myths and legends surrounding Longvek which stemmed from coping with loss when it was sacked.

In one, two brothers – Preah Ko, a holy cow, and Preah Keo, a divine human . were seemingly taken captive and borne away by Siamese invaders. The brothers were considered sacred because Preah Ko had immense spiritual knowledge. It is thought that this story relates to monksand Buddhist texts which were taken away by the Siamese. It’s a quiet picturesque rural place now but the monument to the brothers Wat Tralaeng Keng is still there and is thought to be one of the oldest running pagodas in the country.

This peaceful and charming area has one of the oldest pagodas in Cambodia. Pothi Rokha Ram Pagoda is reached on local Ox Carts directly from Sovanna. The Pagoda has many delightful murals on display in its central Vihara. There is only one other temple decorated in this way and that is in the Royal Palace at Phnomh Penh. This ancient site was used as a distillery, a salt warehouse and, as a prison during the reign of the Khmer Rouge in the late 1970s

Although Viharas are also known as Chaitya Stupa, Wat and Pagoda in different languages they do differ somewhat.

Beautifully scenic and typically how you may think of life in Cambodia. This area is full of idyllic floating fishing villages. And, of course, rice fields dominate the landscape.

There are many historical and religious sites to visit too. We’ll visit local villagers and farmers. Kampong Cchhnang meaning the port of clay pots because the clay found here is the best in Cambodia. Women here learn to make Chhnang’s without a wheel. And, have been using these traditional techniques for more than a millennia.

In the countryside around the rice fields, you will notice very tall palm trees

They are known as Tnaot and are extremely important in Cambodians because all the sugar they use in their kitchens comes from these trees. So, come and meet the villagers in their own homes and discover true Cambodian hospitality 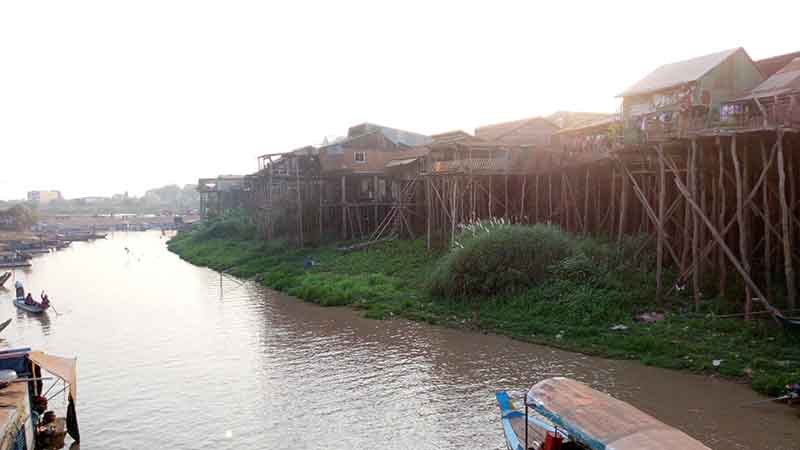 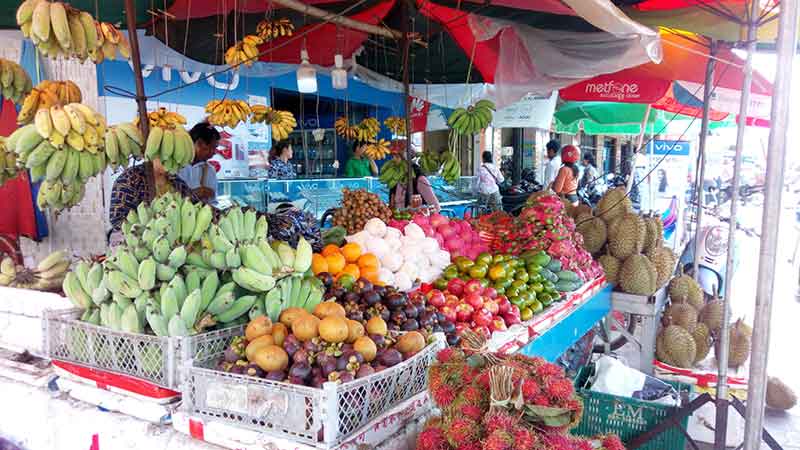 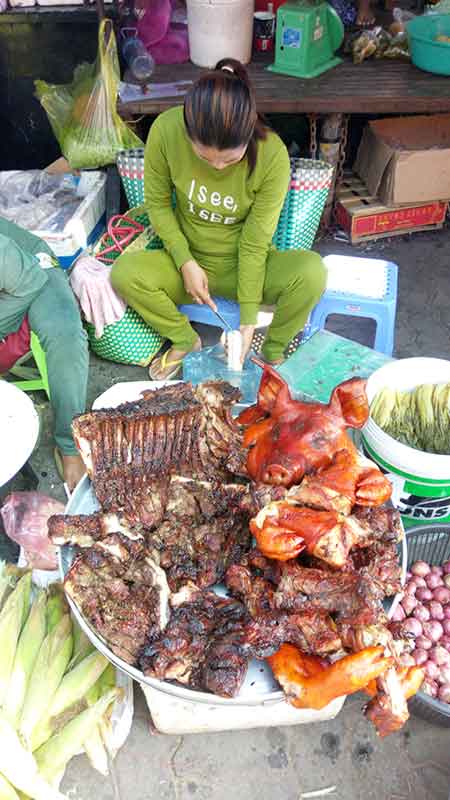 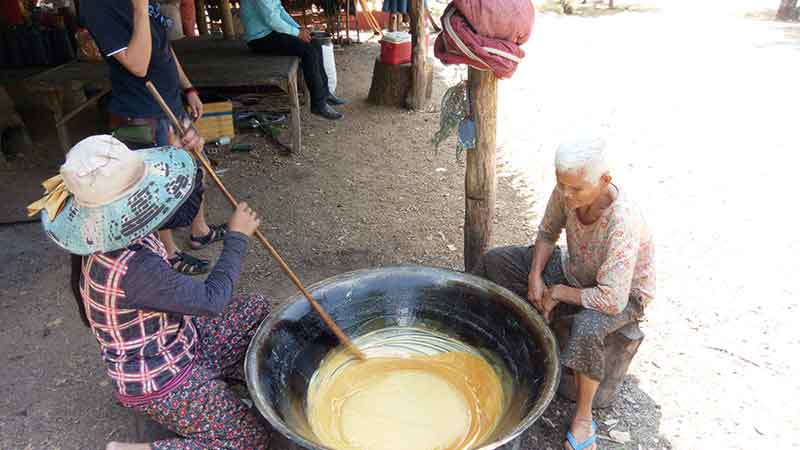 A cruise on Sovanna is undoubtedly the most exciting and relaxing way to travel between Phnom Penh and Angkor Wat & Siem Reap. If you’d rather just stay aboard and relax each day, without visiting any historical sites – be our guest. This itinerary is a guide to the sites and sounds you can experience if you so wish. 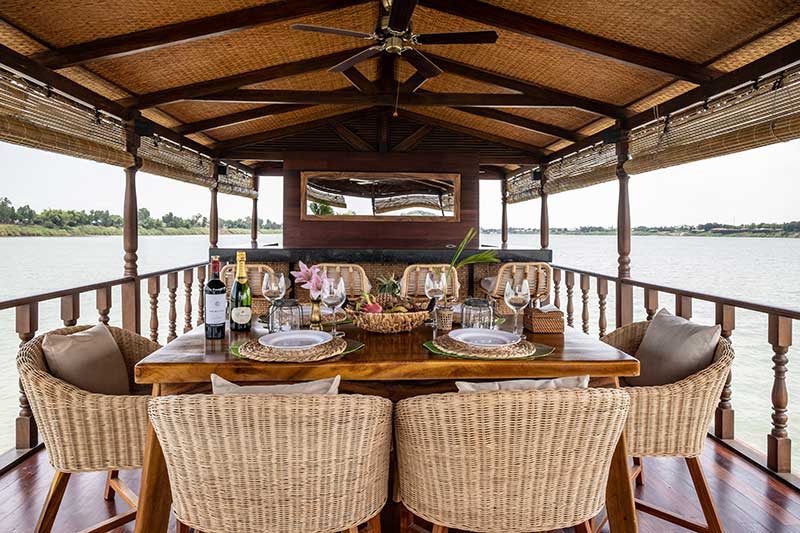 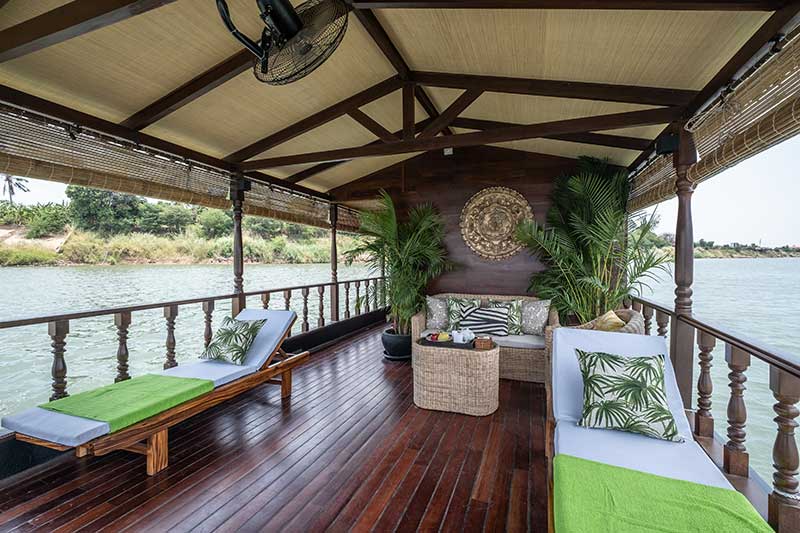 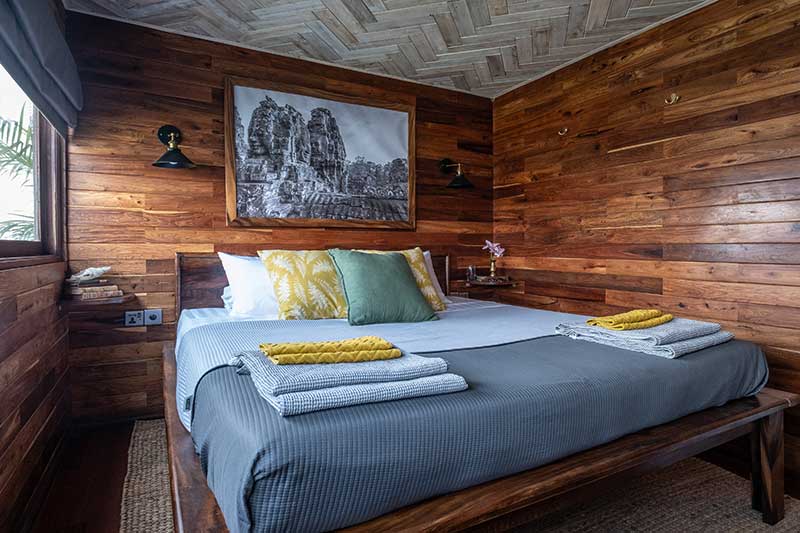 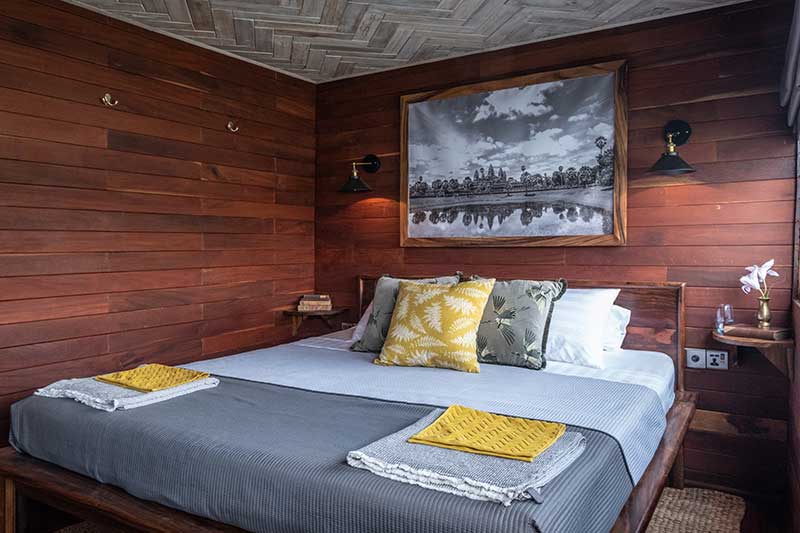 At its zenith, the Khmer Empire or, more accurately, the Angkor Empire stretched from China to Myanmar. The capital being Angkor Thom [Angkor Wat] which, during its peak between the 11th and 13th centuries was the most significant urban centre on earth covering 81 km2. This beautiful part of Cambodia is a powerful testament to the immense wealth and power of the Khmer legacy.

After almost 600 years the Khmer Kingdom was in decline by the 14th Century. Historians believe there were many contributing factors including; religious conversion from Hinduism to Buddhism, revolts from disenchanted vassals, disease and invasion.

The buildings found in Angkor Wat were deliberately designed by Hindu architects to mirror the sacred peaks of Mount Meru where all the gods resided.

Zhou Daguan, a Chinese diplomat in the Khmer Empire around 1270 AD accepted as the best source of information for that period, said the following about Angkor Wat;

All official buildings and homes of the aristocracy, including the Royal Palace, face the east. The Royal Palace stands north of the Golden Tower and the Bridge of Gold: it is one and a half mile in circumference. The tiles of the main dwelling are of lead. Other dwellings are covered with yellow-coloured pottery tiles. Carved or painted Buddhas decorate all the immense columns and lintels. The roofs are impressive too. Open corridors and long colonnades, arranged in harmonious patterns, stretch away on all sides.

A visit to Siem Reap and Angkor Wat is on many peoples’ bucket list. And, you can travel in style and luxury for a once in a lifetime visit to one of the 7 ‘alternative’ wonders of the world. 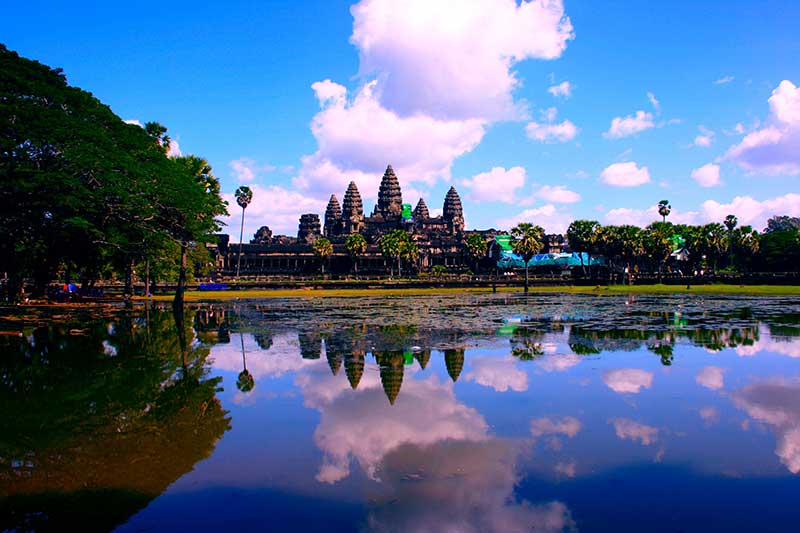 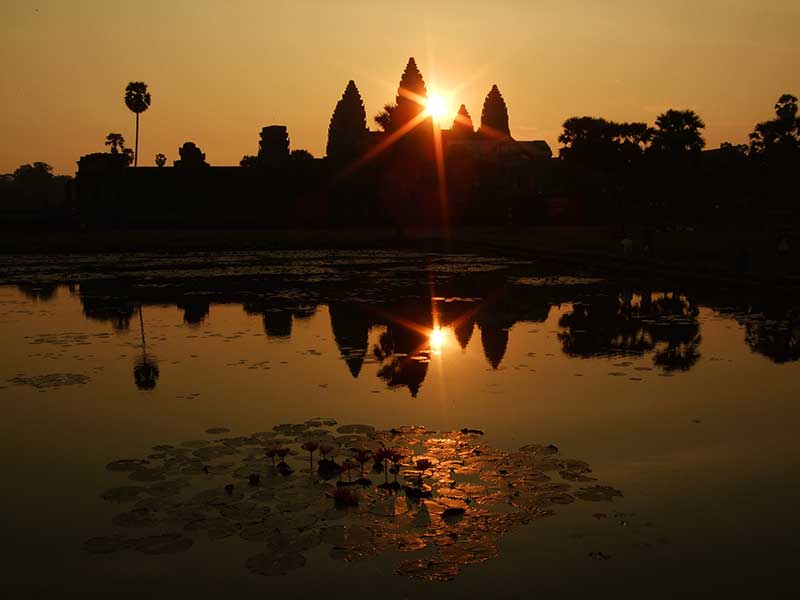 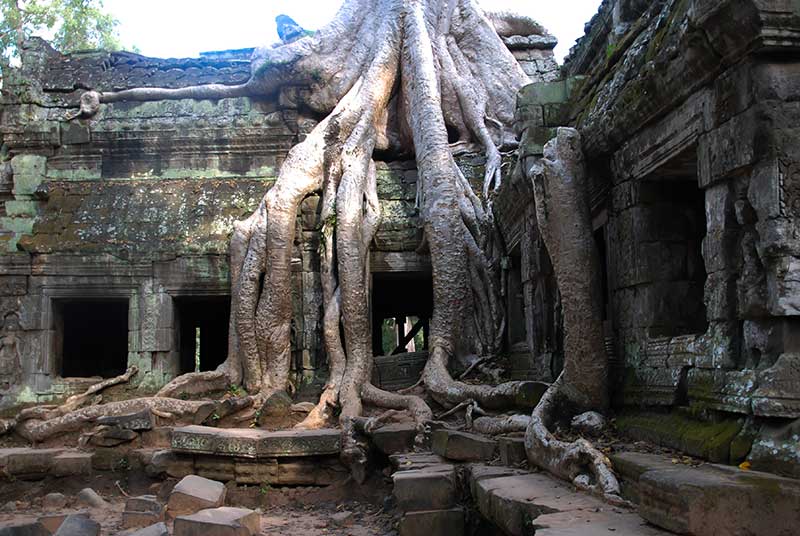 Phnom Penh meaning “City of Four Faces”, Cambodia’s capital sits at the junction between the Tonle Sap and Mekong Rivers. It was crucial to both the Khmer Empire and French colonialists.

It became the capital following the sacking of Angkor Thom by the ruler of the Ayutthaya Kingdom (Siam) at the end of the 15th Century. The Ayutthaya rulers were known to be very friendly with foreign powers and, in particular, with Louis XIV of France. Phnom Penh’s status as the capital was short-lived, however, and in 1505 it was abandoned until once again becoming the capital in 1865.

The intervening years saw the capital established in many different towns, including Longvek and Oudongk on the Tonle Sap River.

In the evening enjoy an aperitif as the sun goes down and look forward to a stunning meal. We cater for all dietary requirements. We love creating fusion dishes, local or European fayre and all produce is sourced fresh each day.

Take as much time as you like to explore the island. You can dictate your pace. Or, if you want to take it easy on board; jump in the jacuzzi or stretch out on the sun loungers – That’s ok too. It’s just as relaxing lazily bobbing on the river in comfort!

Let us help you to create memories to treasure